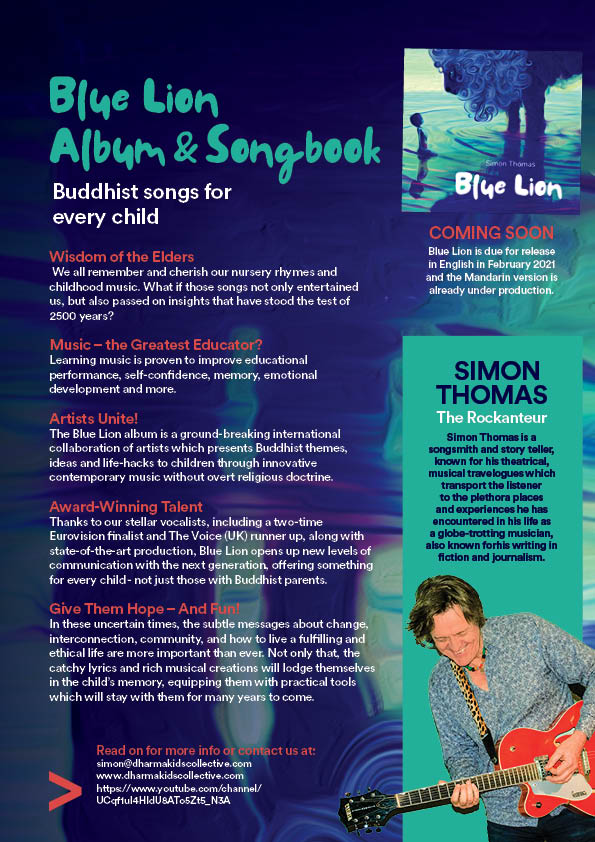 The Blue Lion Preschool is a contemplative preschool in Singapore guided by Dzongsar Jamyang Khyentse Rinpoche. The Blue Lion music album is a collection of songs which were written as an integral component of the unique curriculum. Although the roots of these musical creations burrow deep into ancient Buddhist wisdom and each fulfil a particular niche in the educational platform of the preschool, they also speak a universal truth which is common to children throughout the world.

These songs are an exploration of the wisdom spoken by the Buddha rather than a religious expression. They invoke the virtues of patience, kindness and respect while also supporting the children to take their place as valued members of the community both at school and within their families.

The album will be released on March 8,  2021. Songbook is available now.

Want to get in early? Preorder now on the early bird special and receive your copy before release date

Order now and PAY AS YOU WISH! That’s right, order now and set the price that you think is fair!

With the lyrics to all 15 songs and the delightul illustrations by Alicja Zmigrodzka, this book is the perfect companion to the album There is even a brief explanation about the meaning of each song for parents and carers to help enhance the Blue Lion experience!
Click here for softcover picture book $15 plus postage
Click here for PDF download $7
close
Start typing to see products you are looking for.